Can You Drink Water From a Soft Water System?

Although soft water may sound like a good option for homeowners who have water issues, it’s far from the healthiest water you can drink. Water is a universal solvent and most materials are at least partially soluble in it. Because of this, water can leach heavy metals from water lines. Copper and lead are especially vulnerable. These two metals are both considered to be heavy metals, and they’re not good for you.

Sodium chloride is a naturally occurring mineral that occurs in both natural and artificial sources of water. It is often referred to as rock salt or table salt. It dissolves in water as either sodium or chloride ions. Small amounts of chloride are found in our drinking water, soaps, detergents, industrial processes, and some home water softeners. Most homeowners add around a pound of salt to their water softener each month. 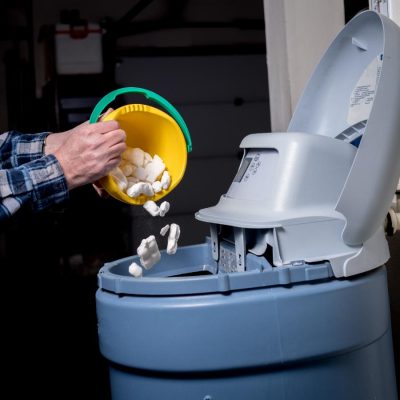 One method for softening water is sodium-ion exchange. This process uses a plastic matrix with ionizable functional groups made up of positively and negatively charged cation and anion elements. One ionic species is mobile and attached to the resin while the other is fixed. The raw water ions pass through the bead structure and exchange with the ions in the resin. After the exchange, the ions are diffused back into the water solution.

Water softeners use a mechanical filter to remove calcium from water. While it is effective at removing calcium, it cannot remove other impurities, such as magnesium. In addition, softeners use large amounts of water, which can be expensive. As a result, softeners need to be maintained regularly.

There are two main types of water softeners. The most common is an ion exchange softener. This kind of softener exchanges calcium and magnesium ions with sodium ions. The sodium ions are negatively charged, while calcium and magnesium ions are positively charged. This exchange process makes it possible for soft water systems to reduce the concentrations of the minerals.

Because hard water contains dissolved carbon dioxide from the atmosphere, the calcium ions enter the water supply. Calcium and magnesium ions become soluble bicarbonates when exposed to carbonic acid. Water softening systems use ion exchange technology to remove these carbonates. However, this process creates a problem known as hard scale.

This process can reduce the amount of hard water in your home. Using this technology, you can soften water without replacing your fixtures and plumbing. The main advantage of this system is its ease of operation. You can operate it with a minimum of maintenance and it doesn’t require you to change the resin beads. This means you can save money, too.

Softeners are an excellent option for homeowners and businesses that are concerned about hard water. They remove dissolved calcium and magnesium salts from water, reducing the risk of scale and fouling fixtures. Because the mineral concentration is lower, the softened water won’t cause damage to appliances. Magnesium in soft water systems will not interfere with cleaning products.

Hard water is a common problem in many regions of the United States. The water in these areas has a high mineral content, including calcium and magnesium, and also contains sediment. These particles are often picked up when water moves from its source. When you drink hard water, you may notice a chalky taste in your mouth. Fortunately, a soft water system can improve the taste of water in your home.

The sodium content of softened water varies depending on the amount of hardness removed by your softener. The more hard the water is, the more sodium is needed to make it soft. For example, water with 11 grains of hardness would require 20.6 mg of sodium per 8 oz. glass of water.